Not what the Doctor Ordered…
14 Comments

Posted by artemisquirrel on April 27, 2012 in Alphabecy, An Infectious Legacy, Sims 3

Last time on an Infectious Legacy, the Simptoms embarked on employment…some more successfully than others…went on a hot date to a cool pool, and ate sandwiches.  Today we join Sara as she takes out the trash.

With that enlightening thought, Sara decides it’s time to have a little chat with Kurtis.  She broaches the subject during dinner, while Kurtis is apparently distracted by the smell of his bowl.

“So, dearest, I was thinking…you know how you just said that this food smells more like plant fertilizer than mac n’ cheese?  Well, fertilizer makes plants grow, right, and growing…plants…is a lot of fun, because everyone loves pretty flowers.”

“Are we really talking about babies here?”

“Look babe, I get what you’re trying to say, but I think this food has already gone off and I’m not really in the mood.  Perhaps a sexy montage of you cleaning up in your lingerie might do the trick, wink wink nudge nudge?”

♪ ♫ “I’m bringing sexxi back…something something growly noise…” ♫ ♪  (We’re spelling “sexy” in this really dumb tween way just in case TLake ever forgets the lyrics to his own song and Googles them, only to stumble upon…this.  We really can’t afford to be sued for some kind of twisted combination of copyright infringement and pornography…)

Wow.  Can’t believe you actually did it.  I must say, Sara, I’m disgusted on a variety of different levels here.

“You and me both, sister.  Also, a bit chilly.  Wouldn’t have killed you to put me in more insulating sleepwear, now would it?”

And on that interesting note, we’ll fastforward to a bit later on in time when Sara and Kurtis decide to meet up with some random work buddy of Kurtis’s named Michael.  Let me just start out by saying that Eye Ar El (in real life), I’ve never had stellar relationships with Michaels for some reason….

“Yeah, I’ve brought up the whole baby thing with him and he just keeps blowing me off…now he’s dragged me off to one of those weird domed parks we have around here to hang out with his pal, who, by the way, kinda looks like a melted Ken doll…just sayin’.”

“So…heard you were talking about making babies, and I thought I’d just come on over and allow you to make my acquaintance, wink wink nudge nudge.”

“Uh, gross.  That stupid ‘wink wink nudge nudge’ thing isn’t even cute when Kurtis does it and I’m MARRIED to him.”

“Oh really now?  And what if I told you that the only thing that would look better on you than a baby would be….me?  Wink wink nudge nudge.”

“Ew, no, I’m still married!  To your FRIEND!  Who is right OVER THERE…on the phone…ignoring this entire exchange.”

“Well.  The awkwardness in the air here is definitely palpable.  Much like the sexual tension whenever I enter a room.”

“Ok, FINE.  You obviously can’t see a good thing when it’s right in front of you, so I’ll just leave you to sit here, by yourself, and read, you…you….NERD.”

“Oh, ouch, burn.  Wah, I’m so upset — hey, look, I’m skilling up at something much more important than you!”

“Hmmm…somehow, your indifference is turning me on.  Yellow flowers?” 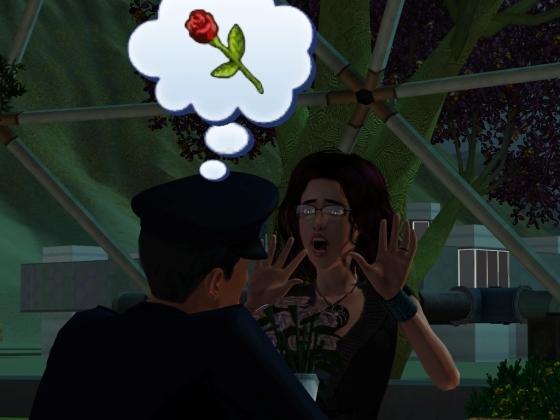